Over the weekend we held a Scotch and Cigar Night at Burn In Hal in Itaewon. 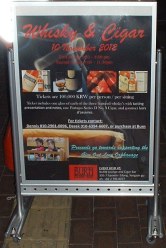 There was a fine selection of scotch available, including some fine Cuban cigars.

This was a very swanky event, so we made sure to dress the part.

We had a speaker to give some reviews and education about the various scotches, he was extremely well-versed in the field.

Some door prizes were handed out to a few lucky people as well.

We raised over a million won for the Give Out Love Orphanage, so I’m pleased to report that the charity event was a complete success.

2 thoughts on “Scotch and Cigar Night”